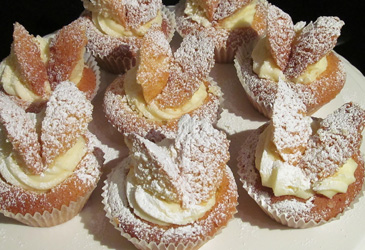 I was invited to afternoon tea at our neighbours in Tasmania where we’ve living for a few months. I hadn’t been out – even for a coffee – for weeks and weeks and so it was something of a novelty to do my hair, pull on a dress and even slap on some make up. I couldn’t go empty-handed but needed something small but delectable that felt like a little gift but would easily integrate into the offerings.

Why butterfly cakes winged into mind I don’t know but I haven’t eaten them since I was about nine and they felt like the perfect ‘plate’ of miniature treats and appropriately old fashioned for good old country afternoon tea.

Well, what fun they were to make! They throw themselves together and are baked in under 20 mins. The house fills with a comforting fug of butter, eggs, sugar and flour cooking together with the magical scent of vanilla.

I used an old recipe for cupcakes and going on memory from 150,000 years ago, I carved out a small cone from the top and filled the plug with half a teaspoon of jam that I’d made a week or so earlier from the fruit of the wild plum in our garden. It was the only jam I had in the house at the time but it seemed to hit a perfect tart balance against the sweetness of the cakes and the gently sugared, lightly whipped cream that I dolloped on top of the jam before I pressed in the wings of the butterfly, formed from the tiny disc of cake I’d cut out.

Onto a platter and dusted generously with icing sugar, the only change I’d make is to have either pastel or white cupcake paper shells. Those fierce pink ones were all I could find in the local village. I’m glad to say those gathered for the feast fell on the butterfly cakes, all of us muttering about childhood memories.

Here’s the recipe I worked with.

Line a muffin pan with cupcake cakes about one third capacity. I got a baker’s dozen from this recipe.

Beat butter, sugar and vanilla until light and creamy. Gradually whisk in the egg mixture. Then add a third of the flour and stir in, then a splodge of the milk and stir that in. Repeat the process until all the flour and milk is mixed in.

Divide the cake batter between the cases and bake for approximately 15 minutes but check from about 14. You want them to be bouncy in the middle.

Cool completely on a rack before you use a sharp knife to cut a slightly conical disk from the top of the cakes. Then cut each of those in half to form your pairs of ‘wings’.

Whip the cream with the sugar to taste.

Use your discretion but roughly half a teaspoon of jam into each well of the cakes, top with a generous teaspoon of the whipped cream and then press your wings into the cream.