Last week I was fortunate to be involved as one of the tutors at Bryce Courtenay’s Final Masterclass in Canberra. It was a sensational week for participants. There was laughter and there were tears…and a lot of talent was on show and between Bryce and all the lecturers we got the very best out of the group. It seemed this group left us feeling confident and motivated about their manuscripts and are now working hard on their novels. So proud of them! Bryce was brilliant – as he always is – and he publicly passed the baton to me as he sadly is not in a position to host any more of these often life-changing weeks. 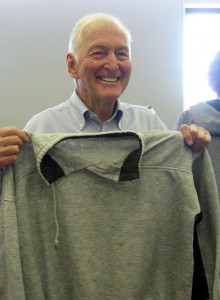 This is Bryce's lucky talisman. He has worn this sweater while writing each of his 23 doorstop blockbusters. (thanks to Juliet Sampson for this image)

When I think of when I attended an identical week of learning with Bryce 12 years ago in Hobart, I certainly experienced an epiphany and changed my career, changed my whole destiny as a result. I’ve never regretted following my dream and now 25 novels later and selling around the world I realise that all I needed was the catalyst.

Some wise soul said to me a few days ago when the student is ready, the teacher will appear. I think this was true for me a dozen years ago and for the Canberra group that graduated from Bryce’s final class last week.

So, keeping my promise to him I am planning the first of the professional Masterclasses for April 2013 during the Anzac Day Weekend, which is traditionally when Bryce would begin his new novel.

The class size will be restricted to 15. The aim of the week will be to prepare participants for success in their approach and the crafting of their novel; you will leave feeling highly motivated and I do hope inspired after an intensive few days that will cover all the key aspects of writing popular fiction. The first Masterclass will be held in Adelaide and students should plan to arrive into the city no later than April 25 for an early evening get together. April 26/27/28/29 will be working days and the final day will include a farewell lunch. For more details, please drop me an email via this site and I will respond promptly.