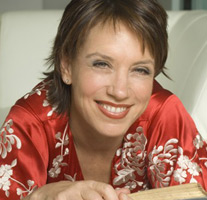 The much beloved First Tuesday Book Club on the ABC will be doing a Jennifer Byrne Presents Fantasy Special mid year.

I was delighted to be asked to appear on the popular program together with other fantasy authors Jennifer Rowe, whom many of you will know as Emily Rodda. Matthew Reilly, and Lev Grossmann from the US are my fellow panellists.

Fantasy is such a huge genre, as many of you who love it already know. But for the less initiated, it is far from the stereotype of what too many still believe fantasy is i.e. goblins and dragons. And I would urge mainstream readers to sample some quality fantasy and discover not only the breadth of its stories but how filled with adventure, emotion, brilliant characters and superb storytelling it is. There are so many genres beneath the one umbrella so if as a mainstream reader you love a more romantic tale then there are plenty of fantasy books for you. And of course if you love action or horror, historical or just straight heroic adventure – a good bookseller can point you to the sort of author who can deliver exactly what you might love. Try it, you may be pleasantly surprised.

A glimpse into mine: Trinity…a quest-like tale about a young man determined to find out the truth about his birth. The most fantastical of all of my stories. The Quickening…the series that put me on the fantasy map. An army general is unwittingly the recipient of a gift when he shows mercy to a woman accused of being a witch during a brutal trial. The gift – or is it a curse? – will dramatically change the course of his life. Percheron….borrowing heavily from the Ottoman era in Constantinople; this story focuses on a girl, bought as a slave and the man who sells her into the royal harem. Romantic, unpredictable and tense as gods and mortals interact. Valisar…my favourite. A flourishing set of kingdoms is overrun by invaders, with the Valisar crown the prize. The struggles of the dynasty to claim back its crown. Powerful, romantic, dramatic with blurred lines between good and evil.

As to the Jennifer Byrne Presents Fantasy – I think perhaps one of the most interesting aspects of this particular presentation is that most of us on the show are diverse writers. Matt for instance writes action adventures, while I’m writing historical fiction and crime alongside epic fantasy adventures and travel. Jennifer might be the household name as the writer of Deltora Quest that got a lot of our children reading fantasy but she has plenty of strings to be her bow from crime to newspaper articles. Lev Grossman is a journalist and book critic with Time Magazine who has written his first fantasy novel.

It’s going to be a fun and lively look at how fantasy in our stories has evolved and where perhaps it might be going, what influences it and us as its writers. How myth and legend intertwine and from where we draw inspiration.