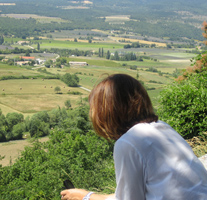 Wow! The months have flown and I’m back from yet another European trip. I was very lucky to be taken to Switzerland and Belgium for signings with my wonderful French publisher, Bragelonne, and there I met so many terrific people that I have vowed to re-learn my French so that next visit I can communicate more fluently with them. True to my word, I have booked into a course in Adelaide and very painfully hoping to dredge out 35 year old memories from schooldays when I certainly knew all my French verbs and could converse adequately in what is, in my opinion, the world’s most beautiful language. Wish me luck – it is hellishly difficult to pick it all back up at this age but one comfort is that it does keep those neural networks open and my brain working hard.

This time I spent most of my time away in France and beyond a couple of weeks in lovely Paris, the bulk of the stay was mainly in the south. I have returned overwhelmed with so much information for this next historical saga that the drama is going to be what to use and what to discard; it all seems precious and important.

The weather in Provence was hot, hot, hot! I was constantly reminded of Australia and certainly if I narrowed my gaze and looked out over cherry orchards and vineyards I could have easily been in the Adelaide Hills, which shares that more Mediterranean climate. I ate my own bodyweight in chocolate in one form or another – if I wasn’t cramming yet another chocolate macaron into my mouth then I was taking chocolate in its most sublime liquid form at cafes like Les Deux Magots in St Germain. Brilliant! But being away did mean I had to miss a whole heap of Masterchef…and I scuttled home just in time for the final.

Thank you to all the people who have read Fields of Gold and written to me about it. I always love to hear from readers so keep your emails coming. The book is moving along nicely, thank you, and has already sold in to foreign markets in Europe and that is giving my publisher confidence to move straight to the next saga, which I’ll be writing later this year and delivering to Penguin Australia next February in time for a Christmas 2011 publication. Please keep an eye on the http://www.mcintoshsaga.com site for more details as they unfold.

In the meantime I am thrilled that King’s Wrath is hitting bookshelves this month and this third volume wraps up the epic Valisar adult fantasy series that is being enjoyed worldwide. I will certainly miss those characters that have been in my life for the past four years. The good news is that HarperCollins has arranged an English-language world buy for the next adult fantasy, due out in 2010. Watch the http://www.mcintoshfantasy.com site and here for details.

Hitting the shortlist for the Children’s Book Council of Australia Awards 2010 with The Whisperer was a fantastic honour – thank you to all the readers who got it noticed by the judging panel and to all who have written to me about how much they’ve enjoyed my work for children. This is very exciting and has prompted Puffin Books to purchase a new young readers’ fantasy – a sequel to The Whisperer, which I am working on now. I hope to have a new children’s site up and running later this year to cater for the younger readers in my life. More details soon.

A new DCI Hawksworth novel has been contracted to Penguin Australia and details of when it will be published will be at http://www.mcintoshcrime.com when I know more. Sorry I’m taking so long to get to the next crime but it’s not for lack of desire – other books are jumping the queue!

Congratulations to 12 of South Australia’s crime writers who got off their collective backsides to produce an anthology of seventeen tales that was published under the title of “The Killing Words”. I launched the book on Saturday, August 7 and I’ve heard that just a few days later they have sold hundreds of them. Brilliant! Email me if you want more details and I’ll put you in contact with Chris Osterman or Stephen Lord.

I will be attending Aussiecon4 in Melbourne during September to celebrate with the rest of the fantasy world our brilliant genre. Don’t miss out on some fantastic writers to say the least. More details: http://www.aussiecon4.org.au/

And while I’m in Melbourne I’ll be scooting along to see some of the amazing array of talent at the Melbourne Writers Festival that coincides. Next time you hear from me I’ll be ensconced way down south in Tasmania, braving its cool spring and from where I will be basing myself for several months to clatter away at my keyboard to produce the next big saga.

We will be overhauling the websites – four of them suddenly! – so please be patient with us as these things seem to take a long time to get right. In the meantime stay warm, stay safe and for those of you who like to write….get on with it!