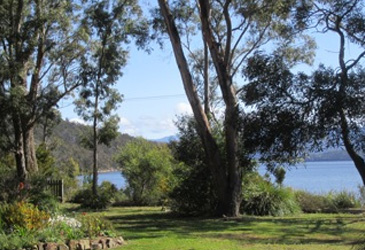 Welcome to my new blog in the run up to the release of The Scrivener’s Tale in November; I’m writing from Tasmania, which is my favourite place to produce my stories from and most of Scrivener was written at my desk in the Huon Valley, where this photo was snapped.  Lovely isn’t it?  Which writer wouldn’t be inspired!  I am extremely lucky.

Well, this one was a surprise for me.  For a decade I’d maintained that I would never return to a story – and the truth is, technically I haven’t – but I also didn’t believe in my heart that I would return to a land I’d written about.  For me the best trilogies do come in threes 🙂 That said, it doesn’t make me any less eager to read the latest from writers I admire enormously like George R R Martin or Robin Hobb who have given the world such amazing and ongoing stories from familiar landscapes.

However, while I have now crafted four big trilogies set in different lands, privately I always see them belonging to the same ‘world’ because the natural rules of the landscapes I use not only mimic our own world but they are in keeping with each other.  In other words I’m not a fantasy novelist who will add a moon or two, or necessarily change how time moves or water flows in the imaginary world.

Returning to my point, saying for years to readers that I would find it highly unlikely that I would return to a realm, I found myself being drawn back to Morgravia after a nine year sabbatical.  You see I wanted to write a single novel so that readers of fantasy – for a rare opportunity – could get a whole story in one hit.  For so long the fantasy genre has trained its readers to accept its storytelling in series.  I suppose we can blame Tolkien and CS Lewis et al, but I also agree that I have always enjoyed reading my fantasies in series and I certainly have enjoyed writing them in trilogies.

Anyway, now that I find myself writing across various genres and thoroughly enjoying the challenge of juggling romantic adventure in period settings together with fantasy for adults and also for children, and even some contemporary crime, I realised it made more logistical sense – in terms of my workload – to deliver stories in one wallop.  I don’t see it as the future for fantasy novels but I do think the readership across the globe appreciates the odd opportunity to get a whole story from one volume.  I have adored GGK’s single volume fantasies for instance – they have always left me wanting more.  If I can achieve that longing for more story, then I reckon I’ve done my job and entertained you.

But!  The reality of writing my new adult fantasy in one novel was tougher that I had anticipated.  After years of writing tales of magic in three big volumes, I had to change my whole mindset and approach but mercifully I’d had some recent practice with the release of the historical sagas. So I reassured myself when the panic began to electrify that it required me to not so much rewire my writing brain for Scrivener but to tap into the new approach that I’ve learned through the crime writing and the historical saga.

In essence I had to hit the main gallop of the story faster and develop the characters more immediately and bring them all together more promptly. I really love this story but it gave me some heartache wrestling it into one volume as there were tempting moments to take it veering off into new pathways – as I normally would – but I had to stay focused on the main thrust of the tale and not keep introducing a pile of new characters or sub plots as I traditionally do within my series.

I thank my lucky stars that Morgravia was waiting for me too.  I wouldn’t like to have had to focus on building a new realm with all of its social, political, spiritual and physical structure from scratch, while trying to power along this big tale.

So, I’m looking forward to welcoming you all back to Morgravia, the main realm that those of you who have read The Quickening will recall.  However, I must say up front that this is not a continuation of The Quickening.  I have deliberately set the story a few generations on from when we left it, so Scrivener could not only stand on its own feet but would feel fresh to new and familiar readers alike.

Thanks for being interested…in my next blog I’ll tell you more about the two landscapes I have used.  Until then.  Best, F