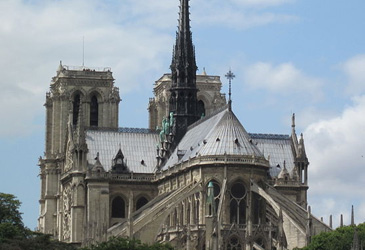 I’ve been travelling regularly through Paris now for thirty years.  I think I said in an earlier blog that it’s my gateway of choice into Europe and often into Britain in days gone when I couldn’t face London Heathrow.  Anyway, certain rituals have developed, one of them is to pay a visit to Notre Dame Cathedral, each time I pass through the city; sometimes I go inside and sit down for a while, other occasions I just walk by or touch the building on my way through from the Right Bank to the Left Bank.  I never ignore it despite that it is also a hotspot for other tourists too and can often be ridiculously crowded in summer.

It sits on the Île de la Cité, an island on the Seine River and is a breathtaking example of French gothic.  My favourite aspects of its wonderful architecture are the fabulous flying buttresses and the gargoyles.  I didn’t know until relatively recently that those creatures were once painted.  Construction began in the 12th century.

It has inspired many a creative person, especiallly storytellers – including me – and particularly one late autumn afternoon when I strolled in and a choral group gave an impromptu performance at the bottom of the great nave.  Could barely keep my eyes dry to hear those soaring voices in that beautiful space.

Anyway, I have written about Notre Dame in travel articles and it features in two of my novels now, The Lavender Keeper and more recently, The Scrivener’s Tale.  In the first it’s part of the sumptuous backdrop of Paris that is taken for granted by its German occupiers in WWll and we see it through the eyes of one character in passing.  In Scrivener, however, it is a key location and a place of inspiration, awe and tremendous comfort for Gabe Figaret.  I’ve never been conscious of imbuing any aspects of myself into a character but I was genuine aware of giving Gabe his fascination for Notre Dame because of my own.  It becomes a touchstone for him – almost a magical place that can calm him or certainly reassure him, simply by him passing by.  In fact he is drawn to the city’s cathedral because since childhood he has been creating the architecture of a cathedral in his mind as his ‘safe place’.  Whenever Gabe is anxious – for example preparing for an exam and even while sitting that exam – he disappears into his mind and to his ‘cathedral’ he builds around himself.  The cathedral looks similar to Notre Dame but is clearly not the same church; he has never seen the cathedral anywhere other than in his mind and yet it is so detailed, so real for him, it is as though he’s reconstructed it from a photograph or a visit.

And it’s this cathedral of Gabe’s mind that forms his strength and one of the pillars of the story of The Scrivener’s Tale.  It is a channel for a special skill but also somewhere during the story that he must retreat to, as you’ll discover.  It’s a complex idea but it worked for me when I was crafting Gabe and gave him the slight strangeness I wanted – that sense of being a ‘fish out of water’ he gives off.  His isolated ways are at odds with his physical attractiveness that draws people to him.  Gabe wants the quiet life and we soon learn about the trauma that has shaped it and why he has been running away from himself for years, why the mind cathedral is so important to him – even now as an adult – and his previous occupation is exposed in the opening chapters.

Gabe lives close to Notre Dame Cathedral and whenever he must cross the Seine, which is rare, he walks across the Parisian bridge that will allow him to skirt the cathedral in each direction.

When I was doing the research for the book and walking across that same bridge – Pont de I’Archevêché  – the Archbishop’s Bridge – I noticed it had become a ‘lovelock’ bridge for visitors and was charmed to read all the lovely padlocks snapped into place by people from all over the world.

They must clear them each year – pity – because it was near enough empty when we snapped on our padlock. (photo from Wikipedia)

Of course I had to join in and went in search of a small padlock and realised that traders nearby, in and around the 5th arondissement, were doing a busy trade in padlocks and barely batted an eyelid when I walked into a cafe and said ‘do you sell padlocks?’  How weird is that?

A few euros later I had locked mine into place on the bridge declaring my love for husband and Paris!

I did have a lot more about Gabe’s Paris in the story but I’m afraid it had to be culled for all the right reasons because the book had become so huge.  Nevertheless, I hope you’ll still enjoy a strong sense of place when you walk around these streets with him.