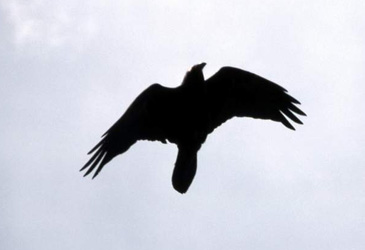 For those of you familiar with my fantasy work, you’ll know that sooner or later a bird is going to crop up in the story.  I don’t know why this happened 12 years ago when I began my first novel.  I’m no lover of caged birds; for me it doesn’t matter how much pleasure that parrot or canary brings, it seems to mock the whole point of being a bird.  Anyway, when I began writing and needed a quiet space to work from, my husband converted an old shed at the bottom of the garden.  He made it look like a cottage, rendering it to look like stone with some lovely old windows he salvaged and an old door.  So now I can look up and down the garden from my office and it inevitably means that through the seasons I share the lives of the many birds and their young which live within the bounds of our property or visit our garden.  And our place has become a haven for so many birds in the neighbourhood as no cat dare cross an inch of our property for fear of a border collie or foxy terrier letting it know it’s trespassing.

I think it’s from this early time in my writing and sharing my writing space with everything from doves to crows that birds have infiltrated my imagination.

Add to this the fact my recurring dream that I can fly.  I have flown in my dreams throughout my life, so perhaps it’s predestined that birds sneak their way into my books.  They’re not always obvious;  Cloot was, in Trinity but Fynch in The Quickening less

so until the reader realises his name mimics the bird; Pez reveals himself in Percheron, and of course, Ravan in Valisar.

Without any planning, without even being aware of him stealing up on me, Ravan found his way into The Scrivener’s Tale as well.  Anyone who has read Valisar will recognise his cameo appearance early on in the tale and for those who remember his role in Valisar, you’ll recall he could move in either a man’s or a bird form.  Be warned, it is a swift glimpse of this returning character and then he’s gone again.  It was quite a surprise for me to see him make his way onto the ‘stage’ but he had his role to play and I didn’t want to ignore his reason for arriving into the story.  (You see when you don’t plan the plot of a story, this sort of walk-in part occurs).

Ravens are easily my favourite birds in storytelling; they are ancient, carry the weight of legend on their shoulders and are often loathed because they signify the omen of death.  They are also the messengers of myth.  All of this amounts to the perfect creature to roam my fantasy stories.

They’re acrobatic flyers and can give the more sexy birds of prey, like hawks and falcons a run for their money. They may even be the most intelligent birds on the planet along with their cousins – crows and magpies.  A lot of people think of these birds as scavengers because they see them feeding on carrion, when in fact they’re smart enough to organise themselves to hunt in packs if the prey is too large for just one.

I like the generally held notion that these birds mate for life and raise their young together for quite some time.  They can live alone, or isolated in pairs but they’re more than capable of moving in family groups and are prepared to join bigger flocks, working together and roosting together.  It’s all about their intelligence and whatever suits their circumstances. These are really big birds too, who look like they’re wearing shaggy trousers and their feathers are a glossy black that in the right light go almost purpley-blue.  When in flight they have a wedge-shape to their tail feathers and those long, narrow ‘fingers’ shape the tips of their wings.  They’re all round more slender than crows and they are soot black throughout – even their eyes.  Beautiful!

They are northern hemisphere birds to my knowledge and in ancient times it was common to see ravens following groups of people on wagons, sleighs, or even hunting parties on horseback, ever the opportunists for easy food.  Isn’t it a parched raven in Aesop’s fable who solves the problem for how to drink from a small amount of water from a tall jug by systematically filling the jug with stones until the water reaches high enough for him to sip?  This is a wise bird species.

I met a raven this year called Merlin – one of the pampered few – living at the Tower of London and I’m not sure if everyone knows the story but ravens have been living at the Tower for hundreds of years.  Reaching back to medieval days, it was decided that The Tower must always have six ravens present (and these days they keep a spare!).  The superstition goes that these beautiful, glossy black birds of omen protect the Crown and should they ever leave, then the throne of England would topple and the nation would perish.  To read more about the Ravens in the Tower, there’s a good article on Wikipedia.

I got to see Merlin up quite close and personal as I was fortunate enough to get behind the scenes at the Tower while researching for a new book for HarperCollins.  And even though I was focused on a different novel, as soon as I clapped eyes on Merlin I knew he looked exactly how I imagined Ravan when I crafted him for Valisar and again more recently for his appearance into Gabe Figaret’s life in The Scrivener’s Tale.

Merlin at the Tower of London in April 2011…note his little red ring around his right foot. Each of the six ravens and one spare are colour coded.

How appropriate then, that a raven named after an infamous wizard of fantasy said hello to a fantasy writer gearing up for a new fantasy novel.  Serendipity perhaps?